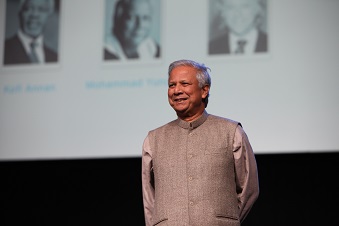 Muhammad Yunus at One Young World

Let’s become acquainted with Muhammad Yunus of Bangladesh, founder of one of the major innovations of the 20th century; we are talking about microcredit.

Muhammad dreams of ‘creating a world without poverty […] this means for every person, a house with a roof, access to drinking water, sanitary facilities, warm clothes in the winter, children that go to school, and to have saved 75 dollars’.

He noticed that many of his fellow citizens lacked access to a small amount of capital with fair repayment terms.

He left his job as an economics professor to found the Grameen Bank in 1983. It is a bank dedicated to the poor, which represents 80% of the Bangalese population.

In less than 15 years, the Grameen Bank managed to reduce the poverty in Bangladesh by 20%. 98% of the borrowers are women and the repayment rates are 98.9%, so, higher than those of formal banks… that did not want to commit themselves in such an adventure. Every year, loans totaling one billion dollars allows the creation of new businesses and jobs.

57 countries have now decided to adopt this model, among them China and the United States. Tireless entrepreneur, Muhammad Yunus also has launched successfully a mobile telephony and a solar energy business, proving that you can develop the economy while adopting a social approach. « When I see a problem, I immediately create a new business. It’s what I did my whole life ». Well done Muhammad!