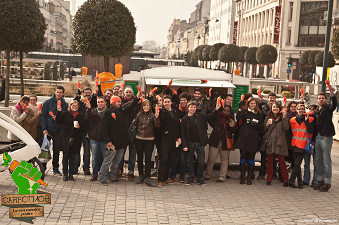 I first met Florian Guillaume, President of Carrotmob France, in a creative meeting. And let me tell you what I discovered.

Marie-Claire : Florian, could you explain Carrotmobing to us ?

Florian : The idea originated in 2008 in San Francisco in the brain of Brent Schulkin. The word Carrotmob is a contraction between the expression “the carrot and the stick” and the word “mob” for mobilization.

The concept is simple: rather than boycotting an environmental unfriendly enterprise, we are going to bring them, one day, a lot of customers: the Carrotmobers! And most of these shops, cafes, restaurants… have seen their sales reach a new record! In exchange, they will commit themselves to invest a percentage of this income (for instance 50 %) to reduce their carbon footprint. We make sure the company respects its engagements and we communicate the results to the Carrotmobers.

MC : How successful is Carrotmobbing today ?

F : Since 2010, we have organized more than 300 Carrotmobs in 25 countries on 4 continents. Our objective is to promote the concept and to make it easy for everyone to organize a Carrotmob. Therefore, we aim to professionalize our approach and to recruit a maximum number of local organizers.

MC: When will the next Carrotmobs take place ?

F: The next French Carrotmob is in Marseille on March 15, then Paris on March 18 and Grenoble on April 5.

MC: Carrotmob is one of the numerous creative initiatives towards a positive economy. And its playful, fun and convivial side will certainly not displease, right, dear Future Shapers? So, Florian, which interesting other initiatives would you recommend to us?

F: Everyday, we meet initiators who create the economy of tomorrow. I think notably at Ticket for Change, a wonderful project aiming to train tomorrow social entrepreneurs. I also recommand Ouishare which mobilizes the collobarative economy actors and Disco soupe, an association that distributes free food to sensitize people against food waste. I also follow Ecoplus TV which highlights all these initiatives.

MC : A thousand thank you, Florian, for sharing these great ideas and see you soon for… a Carrotmob of course !!!

Attention! Next Sparkling Rendezvous will deliver you a “Passport for audacity”! Join us now!