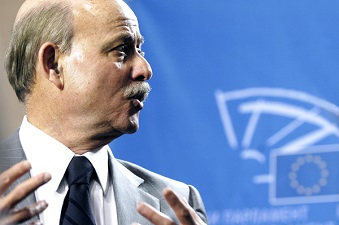 Leaving behind the global environmental and economic crisis “implies a radical change of our way of life on this planet”, says Jeremy Rifkin, Advisor to several Governments and many CEOs.

His economic and socio-cultural model provides an alternative that more and more countries are adopting. Here are the 5 founding pillars of what he calls the Third Industrial Revolution:

1st pillar – To replace fossil energy, on which our civilization is based, with renewable energy. “We have more renewable energy than we need with the sun, the wind, the tides, geothermics, vegetal waste… but only if political decisions are made in time”. (J.R.)

2nd pillar – To transform buildings into structures with positive energy: it’s your building that produces the energy you need. This conversion will provide millions of jobs.

3rd pillar – To develop fuel cells in order to stock electricity. Therefore, the energy is available when needed.

4th pillar – To create a retail system of green energy according to the model of the internet; to share energy as we share information.

5th pillar – To adopt green electricity for transportation and notably for cars. Battery-driven vehicles will be produced by 2015 by the 6 biggest world constructors.

An impossible dream? No, a reality. Let’s take the German example:

To sum it up, Jeremy Rifkin says “We need to rethink the human condition and the meaning of our presence on this planet if we want a future.”

And you, dear Future Shaper, how are you going to act for this new economic paradigm?

NB : This article is based on the following references:
- “The Foundation on Economic Trends” within which Jeremy Rifkin is the Founding Member and the CEO:
– Jeremy Rifkin’s interview by Philippe Stark in the TV program “Futur par Stark” (in French)
- The Third Industrial Revolution: How Lateral Power is Transforming Energy, The Economy, and The World, Jeremy Rifkin’s book translated in 35 languages.