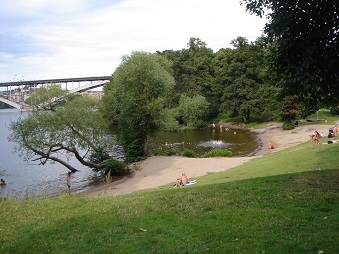 I adored swimming here at Langholmen beach before exploring the town

Imagine an international and creative metropolis with healthy air, water so clean you can swim and fish in it, extensive green areas where you can grab raspberries and blackberries and low noise level compared with other big cities.

Well, this town exists and it is Stockholm! No wonder that, in 2010, this city was chosen by the European Commission to be Europe’s first Green Capital.

Stockholm has, for many years, worked with environmental issues and is going on innovating. The city started a new adventure in 2011 designed to be completed by 2030: the creation of a new climate-positive district Norra Djurgardsstaden. Located in the Eastern outskirt of Stockholm, this district will include 10,000 new homes and 30,000 new jobs. An opportunity to showcase Swedish knowledge in ecotechnology.

“A huge number of actors are involved, because this is like developing a small city” says Tomas Gustafsson, an environmental and sustainability strategist at Stockholm City Development Administration. He continues by “Sometimes it might just look like a need for new technology, but innovation is just as much about creating new forms of cooperation between actors and finding new business models.”(1)

Interesting isn’t it? Well, I thought it would be a nice way to close our year of Sweden as a guest star. Beginning of September, I’ll reveal the next guest star country… no, no, don’t ask before

Discover our new creative challenge on next Sparkling Rendezvous in a couple of weeks!