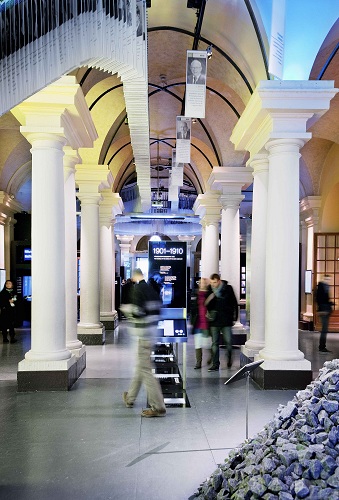 I loved the guided tour of the Nobel Museum!

Let’s go back in the 1800s, in a context of intense industrialization and enter Alfred Nobel’s laboratory. This prolific inventor –350 patents- had become one of the richest men in Europe with explosives. He’d been travelling all over the world, 20 countries, from factory to factory, 93 in all, to provide dynamite for the construction of the railways of Europe. His hope was that, by creating such an efficient weapon, wars would end.

In his research, he experienced much adversity: “If I have a thousand ideas a year, and only one turns out to be good, I’m satisfied.”

That adversity led to the invention of the first international reward of its kind dedicated, as written in his will, […]”to those who shall have conferred the greatest benefit on mankind”[…].

So, the largest part of his enormous fortune was placed in a fund whose interests would be divided among 5 categories: physics, chemistry, physiology or medicine, literature and peace.

Since 1901, 829 Future Shapers have been awarded for their outstanding achievements.

So, if by chance, in the middle of the day or night, you get a phone call from the Swedish Academy, don’t hang up. It might be to announce you’ve won the Nobel Prize

Hum, by the way, how do you reward the spirit of creativity in your company?

Want to plunge into the atmosphere of the Prize by visiting the Nobel Museum in the historic center of Stockolm? It’s here!

On our next Sparkling Rendezvous, we’ll meet for a lesson of inspiration by 3 Nobel Prizes.