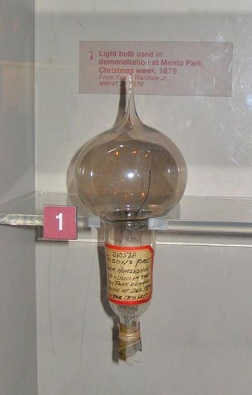 His 3400 notebooks were filled with his overflowing ideas (pict Alkivar)

«Yesterday for the first time THE TIMES Building was illuminated by electricity… It was not till about 7 o’clock when it began to grow  dark, that the electric light really made itself known and showed how bright and steady it is. Then the 27 electric lamps in the editorial rooms and the 25 lamps in the counting-rooms made those departments as bright as day, but without any unpleasant glare. It was a light that a man could sit down under and write for hours without the consciousness of having any artificial light about him… The light was soft, mellow and grateful to the eye and it seemed almost like writing by daylight to have a light without a particle of flicker and with scarcely any heat to make the head ache. »
The New York Times, September 5, 1882

Dear Future Shapers, with this article, I relive with you the emotion of one of the key episodes that led to what Raoul Dufy would paint later as La Fée Electricité (The sprite of electricity). In ten years hence, America would be a glow with electricity; tramways and skyscrapers with elevators made their appearance in cities.

It was the crowning achievement of the determined work and creative genius of Thomas Edison, the seventh child of a poor family, curious about everything and fascinated by experiments.

His working career started at 12 years old as a vendor of pop-corn and newspapers on the Port-Huron/Detroit train and then he became the father of countless inventions such as the phonograph and the first cinema studio.

On October 21,1931, a minute of darkness was observed throughout America in commemoration of this prolific inventor, dead 3 days. Thanks to him, a new era had begun.

Sources : The present article was written from the books « Edison, the man who made the future » by Ronald W. Clark and « De Gutenberg à Bill Gates » written by Alain Frerejean and Charles-Armand Klein