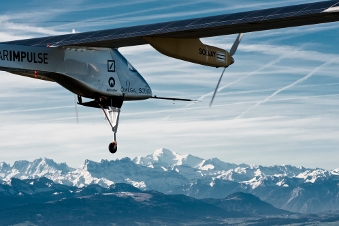 I’ve always wanted to tour the world without fuel or pollution and I’m sure you have too. Our dreams may well come true in 2014!

Swiss team Bertrand Piccard and André Borschberg are the brains behind Solar Impulse, a prototype airplane using only solar energy. With 12,000 voltaic cells on its wings, this unique airplane flew both day and night from Payerne in Switzerland to Brussels in Belgium (630 km), then from Brussels to Paris Le Bourget where it was the Special Guest of the Paris Air Show (395 km), before flying home to Payerne (426 km) at the beginning of July 2011.

What an extraordinary breakthrough this could be in the world of aviation!

In the superb words of Jules Vernes featured so aptly on www.solarimpulse.com, “All that is impossible remains to be achieved”.

So, during the next two weeks, how about taking another look at everything we thought was impossible in our work?