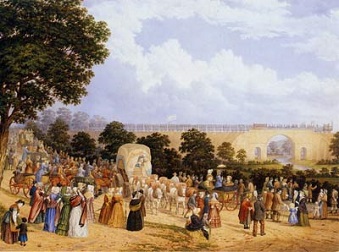 The train is coming! (Painting from John Dobbin in 1825)

We are in England, at the beginning of the nineteen century, the young Georges Stephenson works in the mines. He only learnt to read at the age of eighteen. The loads are heavy and the work extenuating. He succeeds in persuading his mine boss to let him build a steam machine to pull the wagons in the mine.

This is how in 1817, after several models, Stephenson was able to tow 70 tons of coal with his brand new locomotive. In 1825, the first railroad line was opened between Liverpool and Manchester with Stephenson at the controls. And in the middle of the nineteen century, his company was the first European industry. Quite a success story isn’t it?

Like all breakthrough innovations, the train delights and frightens at the same time.

Eminent specialists concluded that the voyagers would contract pneumonia, that the milk of cows close by would sour…

Some farmers would be expelled from their properties and the transporters by water and carriage were afraid they would lose their jobs.

The inaugurations of new lines attracted crowds who said “We just went through two enchanting days, two days without precedent in the history of our ancient Burgundy” (2)

Frédéric Passy, a jurist, economist and Nobel Peace prize winner, asserted: “Every improvment in transport betters the intellect, the morality and the riches of the society” (3)

Nevertheless, the fact was that in 1814, 112 hours were needed to travel by carriage between Paris and Marseille whereas, in 1897, just 12 hours by train sufficed. With this unheard of speed, our perception of time and distance changed completely.

Go to see the video  sorry in French.

ABOUT OUR LAST CREATIVE CHALLENGE

First of all,  CONGRATULATIONS on all the wonderful ideas you came up with for our creative challenge. How to better manage pressure!
Oups!, you haven’t checked out all the ideas yet?
No problem just click here. See you soon!